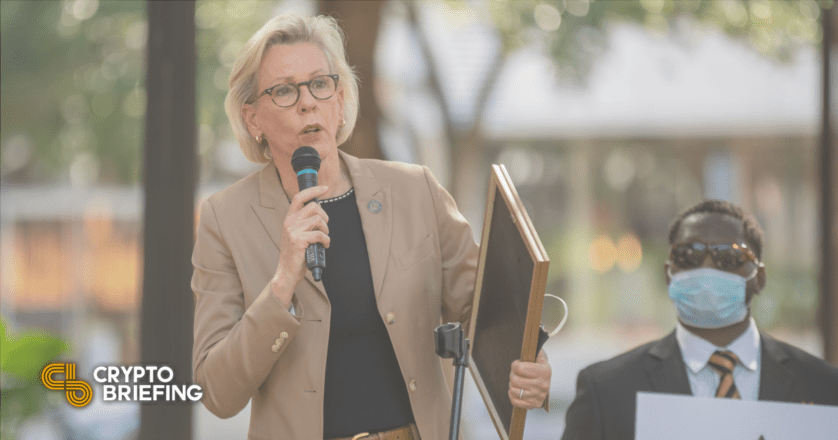 Latest Crypto News Mayor Jane Castor of Tampa, Fla. has implied she will join other mayors in accepting pay in crypto.

Tampa mayor Jane Castor implied on Twitter today that she may be willing to accept at least a portion of her pay in Bitcoin. The news appears to derive from comments the mayor made this morning at the Florida Bitcoin and Blockchain Summit, which she later validated on social media.

Tampa mayor Jane Castor implied on Twitter this morning that she would be open to accepting pay in Bitcoin. In response to Miami mayor Francis Suarez’s tweet concerning his own decision to accept his next paycheck in Bitcoin, Mayor Castor tweeted that she was “up for the challenge.”

Castor is just the latest of a number of American local politicians working to promote their cities as hubs for the nascent cryptocurrency industry, including the aforementioned Francis Suarez of Miami, who has agreed to take at least one payment in Bitcoin, as well as the new Mayor-Elect of New York City, Eric Adams, who has agreed to accept his first three paychecks in the cryptocurrency.

Twitter was first abuzz with rumors this morning surrounding the revelation, which apparently derived from comments the mayor made today at the Florida Bitcoin and Blockchain Summit, currently taking place. While intriguing, Mayor Castor’s “up for the challenge” tweet was not accompanied by a formal public statement to the effect that she would accept her pay in cryptocurrency. However, Mayor Castor appeared to confirm the rumor later in the day by sharing a tweet that publicized the news.

The mayor commented on the retweet, “Champa Bay is a leader in everything from sports to tech — why not #Bitcoin? Tampa is ready to be the next big hotspot for cryptocurrency.”

Details concerning what portion of the mayor’s pay will be in the form of Bitcoin were not made available.

Disclaimer: At the time of writing, the author of this piece owned BTC, ETH, and several other cryptocurrencies.

NYC Mayor-Elect Eric Adams Will Get Paid in Bitcoin

New York City’s next mayor appears to be doubling down on Bitcoin.  Eric Adams to Accept Bitcoin Paychecks  Eric Adams has said he’ll take his first three paychecks as New…

Miami Mayor Will Accept Next Paycheck in Bitcoin

Miami mayor Francis Suarez has committed to taking his next paycheck in Bitcoin along with other city workers. Suarez Will Be Paid in Bitcoin In a Twitter comment today, Suarez…

Miami Mayor Francis Suarez is considering allocating a portion of the city’s treasury reserves into Bitcoin. He wants to turn Miami into the country’s friendliest crypto city. Miami Mayor Warms…