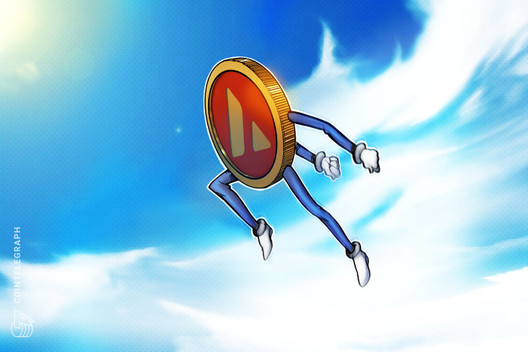 Avalanche (AVAX) is now the 10th largest cryptocurrency by market cap after doubling in price since early November.

AVAX entered the index of the 10 most important cryptocurrencies after displacing Dogecoin (DOGE). In doing so, its outstanding market valuation reached $30.6 billion for the first time, compared to Dogecoin’s $30.3 billion.

AVAX price rose, ignoring price corrections in other parts of the cryptocurrency market after November 10.

In particular, the price of Bitcoin (BTC) plunged almost 20% from its maximum $69,000 all-time high, and Ether (ETH)—the second largest cryptocurrency by market capitalization and Avalanche’s main competitor— was down 19% from its all-time high near $4,867.

However, the bearish sentiment of those coins has not affected the price of AVAX in the last 10 days. The Avalanche token has risen over 64% in the Bitcoin and Ethereum price correction period, hitting one all-time high after another, as shown in the chart below .

AVAX broke its positive correlation with BTC and ETH in the days prior to “Big Four” accounting firm Deloitte’s decision to build its disaster relief platforms on top of the Avalanche blockchain platform.

According to Deloitte’s press release published on November 17, the “Close as You Go Service” aims to simplify “disaster reimbursement applications for victims of natural disasters, by adding and validating documentation required for financing”.

The high-level partnership led analysts to anticipate increased demand for AVAX, which functions as the basic unit of account between the multiple subnetworks of the Avalanche platform and as a currency that users could use for staking in the network to obtain passive income.

The market analyst whose pseudonym is Seq, tweeted a rocket emoji to indicate his long-term bullish outlook for AVAX, adding that the association of Deloitte with Avalanche would allow more exponential alliances.

“It may be difficult to understand the scope of Avalanche,” Seq wrote, adding that the project has witnessed “incredible growth” despite only launching one blockchain n.

Deloitte, the largest professional services firm in the world, spanning 150 countries & 20K professionals, provide consultancy & delivering solutions for enterprises , including 90% of the Fortune 500

This is not only a big partnership, but one that will enable exponentially more https://t.co/Y005ZPzr5w

Deloitte, the world’s largest professional services company, spanning 150 countries and 20,000 professionals, provides consulting and solutions to businesses, including 90% of the Fortune 500.

This is not only a great partnership, but one that will enable exponentially more.

Going into details, Avalanche intends to have multiple chains, some of which it performs n basic functions while others are more application specific. Meanwhile, all non-core blockchains (called subnets) must rely on validators that stake AVAX on any of Avalanche’s three base platforms, named P-Chain, X-Chain, and C-Chain. .

Only “the C-Chain” exists, Seq wrote, noting which is just a blockchain “in of an infinite number of subnets that are possible”. The analyst added:

“We’re only scratching the surface of its potential, and it’s only been 14 months since mainnet! Avalanche has only just begun.”

Views and opinions expressed here are solely those of the author and do not necessarily reflect the views of Cointelegraph.com All investments and trading involve risk, so you should do your own research when making your decision.